Bird ABA’s southernmost borders and beyond

Spend several days offshore over deep-water canyons, underwater seamounts, and around islands of the southern California bight. Our 5-day tour travels north over the 9 Mile Bank, weaves through the Channel Islands, and continues past Point Conception to Arguello Canyon, Rodriguez Dome, San Juan Seamount and wherever the seabirds lead us.

A history of stellar sightings 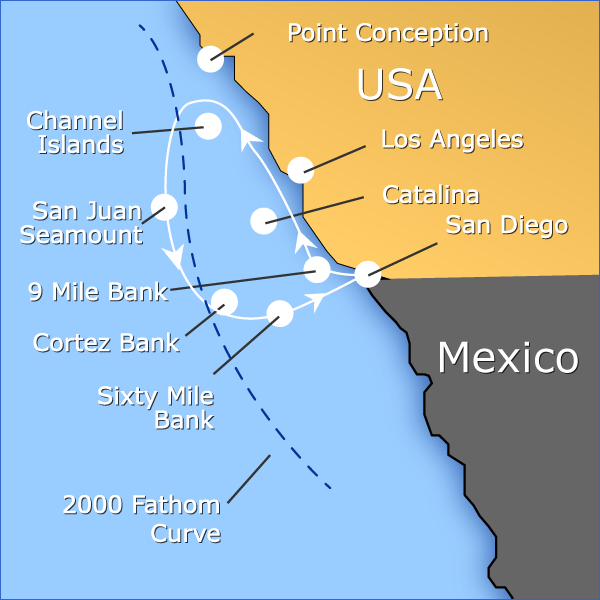 Great trip! Thanks for getting on the birds, great meals, and care/attention from the crew!

Awesome food and service from the captain to the deckhands to the chef. Trip was well-planned for maximizing birds. The gold standard of pelagic trips.

Board Searcher at Fisherman’s Landing by 11 a.m. for passenger orientation. Depart at noon. Spend the day birding to the 9 Mile Bank and other underwater banks, ridges and canyons.

Our second day at sea will find us in the Channel Islands. From there we travel north and west to deeper waters, past Point Conception to Arguello Canyon, Rodriguez Dome.

Today finds us in 2,000 fathom waters where we explore the known Pterodroma corridors near San Juan Seamount and other seamounts at and past the edge of the Continental Shelf, where the rarities roam.

Search the area 40 miles southwest of the Cortez Bank, 150 miles offshore – as far southwest as anyone can get in the ABA area.

See What’s Out There

Variety is the spice of the pelagic